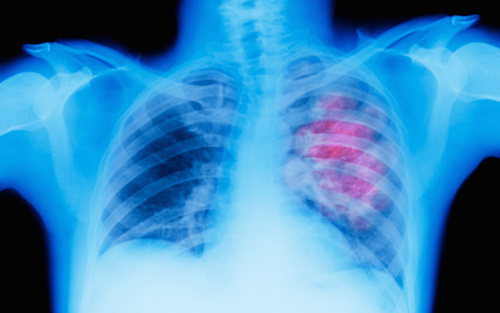 Researchers from Harvard and MIT used a novel technique to map out the chromatin transition states that lead to metastasis in a mouse model of lung adenocarcinoma (LUAD). The team found 11 epigenetic (or chromatin) states that cancer cells may pass through as they become more aggressive. In addition, they found a molecule in the more aggressive tumor cell states that is linked to advanced forms of lung cancer in humans, and could be used as a biomarker to predict patient outcomes.

“This work provides one of the first examples of using single-cell epigenomic data to comprehensively characterize genes that regulate tumor evolution in cancer,” says Lindsay LaFave, an MIT postdoc and the lead author of the study.

Tyler Jacks, director of MIT’s Koch Institute for Integrative Cancer Research, and Jason Buenrostro, an assistant professor of stem cell and regenerative biology at Harvard University, are the senior authors of the study, which was published yesterday in Cancer Cell.

How gene expression changes during cancer development has been well studied, but the epigenetics of this process are less well understood.

These researchers used single-cell ATAC-seq (Assay for Transposase-Accessible Chromatin with high-throughput sequencing), a technique developed by Buenrostro, to study the genome-wide epigenomic continuum of LUAD from loss of cellular identity to the metastatic state.  ATAC-seq uses hyperactive Tn5 transposase, which inserts sequencing adapters into accessible regions of chromatin. Sequencing reads are then used to infer regions of increased accessibility, as well as to map regions of transcription-factor binding and nucleosome position.

In this study, LeFave and her colleagues revealed regulatory programs that pointed to key activating and repressive chromatin regulators of specific transitional cell states. These included a pre-metastatic transition, characterized by activation of RUNX transcription factors. That state, they report, mediates extracellular matrix remodeling to promote metastasis.  It is also predictive of survival across human LUAD patients.

Specifically, the Harvard/MIT team’s analysis revealed 11 different chromatin states, based on the locations of epigenomic alterations and density of the chromatin. Within a single tumor, they found cells from all 11 of the states, suggesting that cancer cells can follow different evolutionary pathways. The researchers also looked at where transcription factors bind to chromosomes in each state.

The researchers found that as the structure of tumor cells’ chromatin changed, transcription factors tended to target genes that would help the cells to lose their original identity and become less differentiated. Many of the cells were eventually able to leave their original locations and seed new tumors — a process largely controlled by a transcription factor called RUNX2. In more aggressive cancer cells, RUNX2 promotes the transcription of genes for proteins secreted by cells. These proteins help remodel the tumor environment to make it easier for cancer cells to escape.

“That suggests that when these cells were in the primary tumor, they actually changed their chromatin state to look like a metastatic cell before they migrated out into the environment,” LaFave says. “We believe they undergo an epigenetic change in the primary tumor that allows them to become migratory and then seed in a distal location like the lymph nodes or the liver.”

Together, these results demonstrate the power of single-cell epigenomics to identify regulatory programs to uncover mechanisms and key biomarkers of tumor progression.